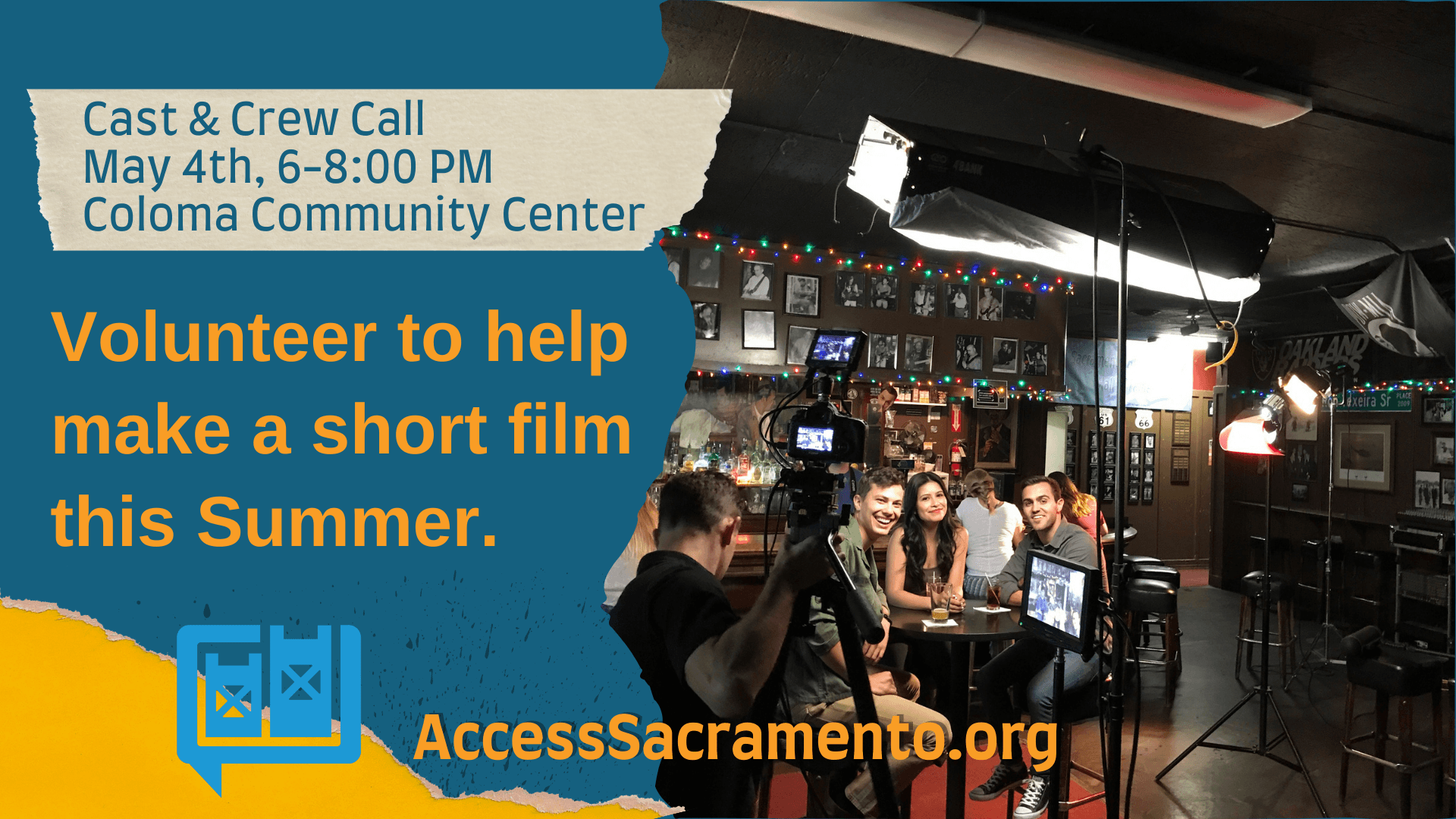 It is worth noting that this scriptwriting competition is unique in the country; The contestants promise to produce their script into a film if they win the competition.  “This film project takes heaps of creativity, commitment and collaboration to turn the winning scripts into final short films to air at the October film premiere,” states Donna Girot, Executive Director of Access Sacramento.

Access Sacramento’s core values include valuing our locality; the competition scripts are judged in part by how the writers have included Sacramento County into their scripts. The films are produced locally, and the community is uplifted with a local film premiere which is filmed and later aired on local cable channel 17, as well as streamed on www.accesssacramento.org, Roku, Amazon Fire and Apple TV.

Access Sacramento Community Media also celebrates and encourages originality, for it is this independent, unique, creative thought that enriches our community.  So, with great respect we congratulate the 2022 “A Place Called Sacramento” Scriptwriting Competition winners:

To contact the filmmakers just click on the title of the film and send them an email.

“As/Is” by Lorene White
First time homebuyers are on the hunt for their forever home, but find the competition more than they can handle.

“Back Home” by Spencer Halverson
Kimmy struggles with her newfound sobriety as she moves back home to Sacramento.

“Becoming Santa” by Shawn Romias, and Brian Black (posthumously)
After an exceptionally magical visit with Santa, a precocious materialistic girl sets out to keep a promise of kindness.

“Bethonie’s Interview” by Jeremiah Shabazz
After a single mother is ridiculed by her mother, she must compete to win her dream job and a new life with her son.

“Earbuddy” by Rylie Decocq
In a not-too-distant future, a grieving man must say his overdue and final goodbye to the person he loves most.

“Hidden In Plain Sight” by Micha Decell
A high-strung reality T.V. star on hiatus in California’s capital city accepts an invitation to rethink her approach to party politics.

“Not So Real Housewives of Sacramento” by Melissa Hojman
A look into the daily lives of four housewives from Sacramento, as they battle through friendships, family and secrets while keeping up with their prestigious image.

“Regrets and Second Chances” by Matthew Johnson
After a chance encounter in Downtown Sacramento, James attempts to heal a past trauma by helping a young homeless woman get off the streets.

“The Ghost Hunt” by Chris Wallace
A team of ghost hunters investigate Sutter’s Fort for their YouTube channel and encounter something they never expected.

The ten completed films enjoy a red-carpet world premiere.  You can enjoy the film premiere of these original short films, vote for the audience favorite, schmooze with these local creators, and feel good that you are contributing to support local community media.